The Virtual Thematic Workshop in Mathematics aims to bring together reputed mathematicians to discuss and to promote high level of mathematics in different fields and subjects, with diversity and geographic balance. Jaqueline Godoy Mesquita completed her PhD in Mathematics in 2012 at the University of São Paulo with a period at the Academy of Sciences of Czech Republic in Prague. She had two postdoctoral positions, one at the Universidad de Santiago de Chile and the other one at University of São Paulo. She held the position of Professor at University of São Paulo (2013–2015) and is currently Professor at University of Brasília since 2015. She has won the International Bernd-Aulbach Prize for Students in 2012, awarded by the International Society of Difference Equations. She was selected to participate at the 5th Heidelberg Laureate Forum 2017 and was selected to be an Oberwolfach Leibniz Fellow during 2018. She was elected young affiliated member of The World Academy of Sciences (TWAS-LACREP) (2018–2022), affiliated member of the Brazilian Academy of Sciences (2018–2022) and regional secretary of the Brazilian Mathematical Society (2017-2019) and (2019-2021). In 2019, she was Capes/Alexander von-Humboldt fellow at the Justus Liebig Universität Giessen, Germany. She won the prize “For Women in Sciences” awarded by L’Oreal, UNESCO and Brazilian Academy of Sciences in 2019 at the category of “Mathematics”. I was born in Mexico City in 1979 to a panamanian mother and a mexican father. After the 1985 Mexico City earthquake my family and I emigrated to David, in Panama. Panama is a great place to grow up. Sadly, Noriega’s dictatorship and the United States invasion of Panama in 1989 created a crisis that forced us to move back to Mexico, where I was able to continue my education. I was lucky and privileged to have a family that always helped me to pursue my goals. I started my undergrad studies in pure mathematics in September 1997 at La Facultad de Ciencias in UNAM. On April 20, 1999 the UNAM went on strike, the details of which are too long to fit in this short bio. This strike ended violently on February 6, 2000. I learned a lot in these months. In 2003 I got my undergrad’s Diploma and thanks to a scholarship went to do a Masters and PhD in France, in pure mathematics. I graduated in 2007, after being mentored by Dominique Cerveau. That same year started a 2 years postdoc at the Max-Planck Institute für Mathematik under the supervision of Martin Möller. In 2009 I returned to UNAM in Morelia, where I am now a full professor of Mathematics. I like groups, geometry, dynamical systems. More details about me are available on the internet. When I am not doing mathematics, I enjoy reading graphic novels and watching birds. Eduardo Teixeira is a Professor of Mathematics at the University of Central Florida, USA. His research interests include free boundary problems and regularity theory for nonlinear partial differential equations. Teixeira was awarded the 2013 Mathematical Congress of the Americas Prize and the 2017 ICTP-IMU Ramanujan Prize, among other distinctions. He is also an elected fellow of the Brazilian Academy of Sciences. 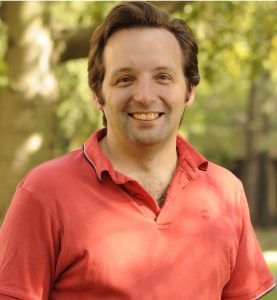 Hernán Grecco studied Physics at the University of Buenos Aires where he also pursued his doctoral degree. He first specialized in experimental microscopy and optics, then turning this experience to the study of biological systems. During this time, he performed two research stays at the Max Planck Institute for Biophysical Chemistry (Göttingen, Germany) funded by DAAD. After obtaining a Ph.D. he worked as a post-doctoral fellow at the Max Planck Institute for Molecular Physiology (Dortmund, Germany) and later as a group leader at the same institute.He is currently a Professor at the University of Buenos Aires and a Researcher at CONICET. He leads an interdisciplinary group focused on developing optical methods to quantify biological processes and study the mechanisms of spatial organization of living matter. Since 2015, his research group has been associated with the Max Planck Society (Germany). He collaborates with companies and NGO to develop science based-solutions for open problems. He is an active public communicator, participating in several outreach events and publications. He has been chosen as one of the 5 young members Young Affiliate of 2013 by the “The World Academy of Sciences” (Trieste, Italy). In December 2013, he was awarded the “Stimulus Award” from the “Academia Nacional de Ciencias Exactas Físicas y Naturales” (Buenos Aires, Argentina)}. In 2015 he was awarded the “Enrique Gaviola” prize from “Academia Nacional de Ciencias” (Córdoba, Argentina). Together with his group of, in 2015 he received the “Innovating Award” in the “New Technologies in Scientific Research” category. Franco M. Cabrerizo is currently a Research Member of The National Scientific and Technical Research Council (CONICET, Argentina) and Associate Professor at National University of San Martín (UNSAM, Argentina). He holds a BSc (2002) and a Ph.D in chemical sciences (2005) form the National University of La Plata (UNLP). He is member of the Executive Committee of TWAS Young Affiliates/Alumni Network (TYAN) and member of the TWAS-LACREP Executive Council. Dr. Cabrerizo was awarded the “G. Cilento Award” (by The Inter-American Photochemical Society, 2006); the “Ranwel Caputto Award” (The National Academy of Science of Argentina, 2009), the “Dr. Eduardo Gros prize” (The National Academy of Exact, Physics and Natural Sciences, ANCEFN, Argentina, 2015), the “Dr. Eduardo Gros Award” (The Argentine Society of Research in Organic Chemistry, 2015), Young Affiliate Member of The World Academy of Science TWAS (2015-2020) and The CAS President’s International Fellowship Initiative (PIFI, 2018). Alicia Dickenstein is a Professor at the University of Buenos Aires and Investigadora Superior at CONICET, the National Research Council of Argentina. She is a Member of the National Academy of Exact and Natural Sciences (ANCEFN)  and of the National Academy of Sciences (ANC) of Argentina. She was Vice-President of the International Mathematical Union.  She is an AMS Fellow and a SIAM Fellow. She holds Honorary Doctorates from Universidad Nacional del Sur, Argentina, and the Royal Institute of Technology (KTH), Sweden. She received the 2015 TWAS Prize in Mathematics and the 2021 L’Oréal-UNESCO Award “For Women in Science”. Maria José Pacifico is an expert in dynamical systems, with an impressive number of central contributions in the area, many of which published in major mathematical journals. She is mostly known by the notion of singular hyperbolicity and she is perhaps the world leading figure in the theory of Lorenz like attractors and singular hyperbolicity. Born in Guariba, a small city in the interior of São Paulo, she completed her undergraduate studies in the State University of São Paulo, got her PhD at IMPA, under the guidance of Welington de Melo. She developed all her academic career in Brazil,  at the Federal University of Rio de Janeiro since the 80’s, where she is a Full Professor. She is a titular member of the Brazilian Academy of Sciences and of the World Academy of Sciences-TWAS. 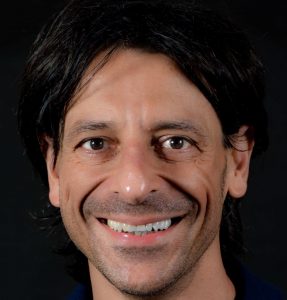 Born in Rome, Italy, 1964 Graduated in Mathematics from Università La Sapienza (Rome, Italy) in 1987, and Ph.D. in Mathematics from the Pennsylvania State University (USA) in 1994. Held a Researcher position at Università dell’Aquila (Italy) from 1992 to 1996, Assistant Professor (1996-1998), Associate Professor (1998-2003) and Professor (2003-current) at Universidade de São Paulo, Brazil. His mathematical interests range from Riemannian and semi-Riemannian Geometry, Mathematical Relativity, to calculus of variations and PDEs on manifolds, Morse theory, bifurcation theory, and Lagrangian/Hamiltonian systems. He has been a member of the Brazilian Academy of Science since 2012. Currently, he is President of the Brazilian Mathematical Society, and member of the International Matthematical Union Executive Committee. Married with two children. He studied his BA (1984-88) and MA (88-89) in mathematics at the Faculty of Sciences of the National Autonomous University of Mexico. The doctorate was carried out at the IMPA in Rio de Janeiro (89-93). Since 1994 he works at the Center for Research in Mathematics in Guanajuato. Where he is currently a tenured researcher C. Member of the National System of Researchers level III and member of the Mexican Academy of Sciences. His specialty is dynamic systems, partial differential equations, and the calculus of variations. He has written over 25 articles with around 700 citations. He is president of the Mexican mathematical society in the period 2020-2022.For just over two years he edited a science section in the newspaper Correo del Estado de Guanajuato. In her spare time she enjoys photography, walking, swimming, gardening, painting, and reading.